Short walks in the Supramonte of Baunei. 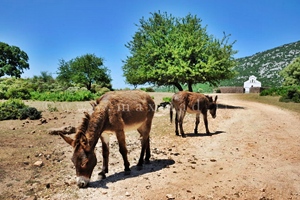 A wide plateau covered with a dark casting of Pleistocene basaltic lava, separated from the sea by the whitish ridges of limestone mountains, typical features of the inland parts of Baunei.

This is what the Plateau of Golgo looks like, a real “mountain gap”, along the eastern coast of Sardinia, for those coming from Baunei along the road called “BiaMaore”.

Rich in important historical and archaeological sites, well known for the presence of a frightening karstic pit called “Su Sterru” (one of the deepest in Europe among those with a single-span), the plateau is one of the main attractions of the vast territory (22.000 acres) of Baunei.

Imposing remains of the Nuragic civilisation, the “Nuraghi”, towers of stones,  strategically placed to defend the valley, and a charming country church dating back to the late sixteenth century, tell us about an ancient human presence in the plateau of Golgo.

Extraordinary witness of a mysterious distant past is the nuragical anthropomorphic Betyl which is considered as a unique item in Sardinian archeology. It is located in front of the wall surrounding the churchyard and it has been studied in depth since the 70s.
An aura of mystery surrounds the pools called As Piscinas which are bizarre basalt basins, situated not far from “Su Sterru”, where rainwater stagnates all year.
This is a site where, according to experts of the Nuragic Age, magical rites linked to the worhip of water took place.